Each individual Fedcap works with actively engages in services to meet their ongoing reentry needs, with the goal of successful integration into the community and reduction in recidivism. 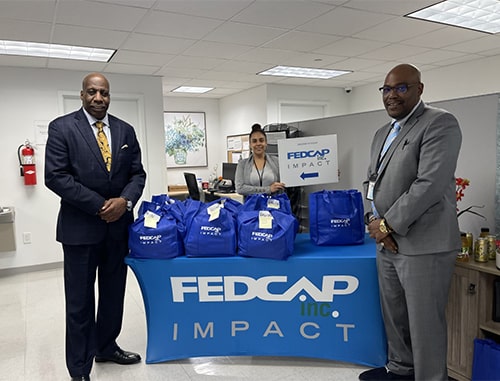 On May 19th at around noon, the Mayor’s Office of Criminal Justice (MOCJ) and NYC Department of Corrections (DOC) contacted Silvia Estrada, Director of Justice Initiatives for Fedcap Inc. Nineteen men were being released from Rikers Island early as part of a 6A initiative (Rikers Early Release due to COVID), and 14 of them would be coming to Fedcap between 6pm and midnight. The men didn’t know they were being released until that day. Would she be ready to receive them?

Sylvia and her team sprang into action. Staff members from Fedcap Inc.’s IMPACT and LINK programs offered to stay as late as needed to welcome the men home. They prepared hygiene kits, metro cards, gift cards, snacks and cell phones for the men to have upon arrival. Most of those returning from Rikers have homes to return to, but for those that don’t IMPACT coordinates with an agency that places people in hotels designated for reentry.

At 9 pm, the DOC bus arrived at Fedcap offices at Gertz Plaza in Queens. “The gentlemen were greeted by our team with smiles, lots of clapping and all the goodies,” Silvia said. “Seeing their faces brought joy to all of us. Every single one of them thanked us and were extremely appreciative. We heard statements like ‘When I woke up this morning, I never imagined I would be out and coming home to all of this, it is incredible.’”

To date, the IMPACT team (Integrated Model through Programming, Accountability, Community and Training) has received 46 individuals from Rikers early release, and 30-40 more are expected in the next few weeks. The team follows up with each individual on a weekly basis as part of an early release contract they sign with DOC.

All were enrolled in LINK, (Leveraging Inspiration, Networks and Knowledge) Fedcap Inc.’s Rikers-based program, where 22 fulltime staff work on Rikers. The program is active in four of the nine jails on Rikers Island. LINK engages with about 700 people daily, providing case management, mentorship, work readiness and hard skills training. After release, individuals are enrolled in IMPACT, Fedcap Inc.’s reentry program. Each individual actively engages in services to meet their ongoing reentry needs, with the goal of successful integration into the community and reduction in recidivism. Reentry supports include mentorship, medical and mental health referrals, substance use treatment referrals, work readiness, sector-based training, job placement, retention services, and case management.

The yeoman work of Silvia and her team elicited high praise from DOC. “I wanted to personally offer our sincere gratitude to you and your team for your commitment and dedication to those assigned to our care,” wrote Francis Torres, Deputy Commissioner, Division of Programs and Community Partnerships, DOC. “The dignified way in which Fedcap welcomes and celebrates their reintegration is unparalleled. We know the work we will do is always wrapped in uncertainty and yet all we can do is try. And Fedcap does that and more.”

The programs have an impressive record of success in their first year of operation. Employment metrics show that 108 individuals served by the program are actively employed—about 25 percent of those enrolled since rollout. There have been only two rearrests, not even a single percent of those served. The program has great value in reducing overcrowding and fights at Rikers Island. Those eligible for early release are noted for good behavior and have no incidents on their records.
Grant Collins, Senior Vice President of Workforce Development, The Fedcap Group, praised the teams’ efforts. “The work that we do providing much needed in-community services for those coming out of incarceration is vital. Silvia and her team continue to do exceptional work right here in New York City. Congratulations to the entire Fedcap Inc. criminal justice team serving the community inside Riker’s Island and those returning to New York City.”