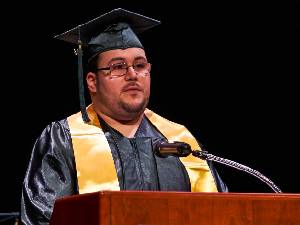 “The voice that always told me I was going to fail is not as strong now, so I pushed it away and focused on what I had to do.”

Jonathan Colon passed the food handlers certification test on May 30th – a major milestone for the 28-year-old Bronx man, who has overcome a lifelong struggle with anxiety and depression to graduate from Fedcap’s culinary arts program.

It’s been a hard road for Jonathan, who grew up in the Bronx with his parents and four sisters, a close and loving family. There were dark clouds – Jonathan always felt a little uneasy and out of place. A bicycle accident in kindergarten shattered his elbow and caused nerve damage, triggering and deepening his struggle with depression. Jonathan hated the thought of being a burden to his family, and withdrew. Over time, he had suicidal thoughts.

“I started getting anxious when I was around people, and didn’t want to talk to anybody. No matter what I did I always felt sad, but I realized I couldn’t always be sad around my family and friends. I didn’t want to bring them down. I didn’t confide in anyone, so I put on a fake smile.”

Jonathan’s family became aware of his distress after an incident at the Bronx Zoo. “We usually got to the zoo early when it wasn’t too crowded, but this time we stayed longer. The crowd started to get to me, and I broke down, just froze. My family got me away from the crowd and we left. I told them what I was dealing with, that what I had been feeling for a long time.”

In school Jonathan kept to himself, and was bullied for it. He skipped classes but still graduated. He got his first job, stocking shelves on the night shift at Toys R Us.

“I knew I needed a job because I wasn’t going to college. I needed to be an adult, and lied to myself that I was ready for it. The truth is I felt so out of place I was so nervous and stressed out. I was in a very dark place.”

Jonathan avoided coworkers whenever possible. Every time he made a mistake he became depressed, and couldn’t work. Wanting to succeed, but being unable to, only added to his depression. Jonathan quit his job after a week and spent the next few years in his room at his mother’s house, hiding from the world.

“I felt like I wasn’t good enough, so I stopped trying,” he said. Jonathan’s mother found a therapist for him.

“At times I felt like I couldn’t trust this person, and that if I opened up I would be a target again. I began to open up to her and started to feel better, not so far into hating myself.”

Jonathan shared a dream with his therapist – that one day he might open up his own restaurant, a bar and grill that catered to a young crowd. Barbecues at the beach with his family had instilled a love of cooking in him. The therapist told him about Fedcap’s culinary arts program, saying it might be for him.

Just thinking about work triggered Jonathan’s fears and anxieties, but he was encouraged to try. He did, and after evaluation and testing, began culinary training on January 8th, 2018. Jonathan was inspired by the energy and support of culinary instructor Chef Lex.

“He was always communicating, and would always show me how to do things better if I made a mistake. When I spoke to him about taking the food handlers test he had so much faith and confidence in me. He said I would be fine. Hearing that from someone I respect so much put me in a good place, and I was ready for the test.”

“The culinary training program has been amazing. “I learned about new types of cooking and new flavor combinations, and got some experience catering. The minute I start cooking I feel good about myself, and I’m so busy I don’t think about being depressed.”

Jonathan is apprehensive about reentering the workforce, but he knows he can do it. He no longer has suicidal thoughts, and when he hears the inner voice tell him he’s not good enough, he has new strategies to manage it.

“I feel confident I can do this. I am hoping after I graduate I have a job. I want to work my way up, and I want to push myself.”

“With the support of Chef Lex and my therapist I am in a place where I feel stable. When I graduate I want to have a job I feel confident that I can get a job. I want to work my way up, and really push myself. My parents are proud of me and they’re planning to attend my graduation from the culinary program. ”