A panel of noted experts engaged in a thought-provoking discussion about the role of business in supporting early childhood child hood development. The panel included –

• Caitlin A. Codella, Senior Director of Policy at the U.S. Chamber of Commerce Foundation Center for Education and Workforce

• Michael Weinstein, Economist, and Executive Director of Impact Matters, a nonprofit agency focused on raising the quality of work in the nonprofit sector

The topic is of great interest to the Fedcap family of agencies—we both provide early childhood development services and we are very interested in helping business meet their workforce needs for the future.

Caitlin Codella opened the dialogue by stating that concerns about the workforce pipeline underpin much of the Chamber’s work, including its research on early childhood development. The work is based on research that shows that investing in children in their first years of development is both more effective and less costly than interventions later in life and has a tremendous return on investment.

Most public policies that address social issues are focused on fixing problems that have already happened, Ms. Stevens told the gathering. The beauty of this topic is we have the opportunity to do it right…first . Quality early childhood development programs are firmly grounded in the science of brain development, which shows that healthy brain architecture depends in large part on the neural connections that are formed in the first five years of life.

Michael Weinstein pointed out the challenges of measuring the impact of most educational interventions including early childhood— which can’t be known with any degree of certainty until much later in life. Research exists that provides examples of interventions that work, but it is not clear which aspects of the interventions drove the impact.

“We know less about the impact of early childhood interventions than anything in the social sciences,” Mr. Weinstein said. “There is a lot we don’t know but also a lot of reasons to be optimistic.”

Katharine Stevens agreed that research is unclear as to the effectiveness and impact of specific programs, but that the science of early brain development makes a convincing case for business investment in early childhood development.

Investing in programs that won’t show a return for several decades is hard to justify for businesses, but it’s important to remember that early childhood development is about the workforce of today as well as tomorrow, said Ms. Codella. Two-thirds of children under six have both parents in the workforce, and quality childcare programs make for more productive employees, and reduce turnover and absenteeism.

After the highly engaging panel discussion Fedcap CFO Karen Wegmann thanks the participants, sponsors and guests, and summed up one of the key takeaways: “As a society we must find ways to invest in our children and our future workforce.”

PrevPreviousSolution Series: Leading as Women: How Women are Increasing Productivity and Changing Business
NextSolution Series: The Employment of People with Disabilities: Moving Beyond Social Responsibility to a Business SolutionNext 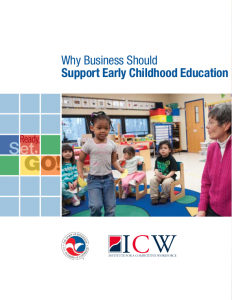