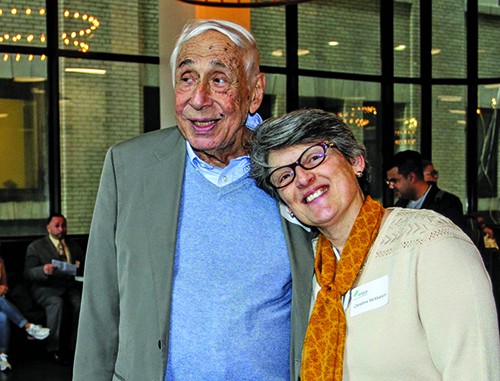 This week an icon left us and with his passing, the lights in New York City are a little less bright.

Herb was a giant with a big brain, a huge heart and tremendous passion for fairness and justice. Simply put, he saw wrongs and tried to right them. His genuineness and depth of character caused people around him to listen to what he had to say. He was the force behind significant social reform in New York City—but chose to work behind the scenes. He was too smart to believe that only one person had all of the answers, so he found creative ways to bring people together to solve problems– a pied piper of sorts who brought us all along to make the world more just.

Early in my tenure as the CEO of the Fedcap Group, I was introduced to Herb by Carol Kellerman, then President of the Citizens Budget Commission. This meeting changed the course of my work and our organization. It also changed me.

Herb mentored me—why he chose me I will never know, but I will be eternally grateful. He challenged ideas and asked me some of the smartest, most astute questions I have ever been asked. He helped me refine goals and think strategically. He taught me the art of planning important, system-changing advances, by practicing patience and taking incremental, tactical steps. He was the epitome of being “better together” and it was magical to watch him in action. He told me when I was doing a good job and maybe more importantly, when I wasn’t.

Herb was also my dear friend. Many Sunday mornings we went to breakfast, and I laughed until it hurt, as he shared his many remarkable stories. As was his way, he captivated people around him, including wait staff and people passing by our table, with his charm and wit. He had a twinkle in his eye that I will forever remember.

Over the past year or so, as his body was slowing down, his mind was ever on alert, looking for connections and opportunities to make a difference—doing this mattered to Herb.

How privileged we were to have this legend, who was at the same time such a lovely human being, walk among us for 90 years.

The Fedcap Group created this video to honor Herb and his many contributions to New York City. I hope you enjoy it.

Goodbye my dear friend, I will miss you.

The Evolution of Supply Chain Management

Understanding the Interconnectedness of Societal Problems

The Courage to Change Course