On Wednesday October 28, Congressman Patrick Kennedy spoke at Fedcap’s 10th Solutions Series. Mr. Kennedy served 16 years in Congress and is one of our country’s leading and most compelling advocate for changing the stigmatization of mental health and addiction, and improving access to care.

The invitation-only event, hosted by the law firm of McDermott Will & Emery, was attended by over 75 business, government and health care leaders. It was live streamed to audiences in London, Boston, Syracuse, Washington DC and Concord, New Hampshire, where over 175 people participated.

Craig Stenning, Fedcap’s Senior Vice President for Occupational health, welcomed guests and thanked Fedcap President and CEO Christine McMahon for her energy and commitment in making these events possible. He thanked Congressman Kennedy whose recent book, A Common Struggle: A Personal Journey Through The Past and Future of Mental Health and Addiction, highlights his own struggles, and those of his famous family, with mental health and addiction.

“We honor Congressman Kennedy’s courage to share his story, which mirrors those of millions of Americans who are suffering from an untreated mental illness of addiction,” he said.

Ms. McCray introduced Representative Kennedy, thanking him for breaking “the conspiracy of silence around his own troubles” with the publication of his book, and for his signature legislation, The Mental Health Parity and Addiction Act, which provides equal access to care and treatment for people with mental illness. She thanked Fedcap for its efforts on behalf of individuals with mental illness and intellectual disabilities; “New York City is so lucky to have an organization like Fedcap fighting on behalf of our neighbors who face barriers to employment. I saw first-hand how Fedcap is changing lives when I visited Fedcap’s WeCare site in Brooklyn.”

In his remarks, Representative Kennedy called the fight for the rights of people with mental illness – including access to treatment that is equal to those with physical illness – “the new frontier of social justice.” He called for funding to be directed to support outcomes, not just deliver services, and to prioritize placing people who suffer from mental illness in supported environments where they can work and enjoy independent lives.

Representative Kennedy spoke of mental illness in moving and personal terms. He said that unacknowledged and untreated mental illness is corrosive to every single person in a family, and that none of us in society escapes its impact. He said that policy makers pay lip service to mental illness, but if this were a physical disease like diabetes or cancer, it would be considered a public health epidemic.

“We all know the secret sauce of health care reform is managing the depression and mental illness off people in the community, the workplace and in health insurance plans where people are neglected because of the shame and stigma of having that diagnosis,” he said.

Representative Kennedy discussed the great work being done in New York State to improve access to care for veterans, and innovative programs to help individuals with untreated mental illness and addiction who are involved with the criminal justice system.

In closing remarks Representative Kennedy graciously thanked Fedcap for its work in providing opportunities for people with barriers to find jobs. “Thank you Fedcap for your work in what is so essential and often missing in discussions about mental health and addiction, and that is employment, which in our culture is tied to self-esteem. What President Kennedy tried to do with the Community Mental Health Act of 1963, to help people lead productive lives while living with their families in their communities, is what Fedcap does every day.” 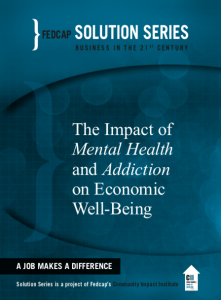