Solution Series: Immigration and Its Impact on Business

On Thursday March 26th over 150 people representing businesses, foundations, nonprofits and government, participated in person and via streaming in Fedcap’s 9th Solution Series. The topic was “Immigration and Its Impact on Business.”

A panel of distinguished thought leaders convened at the Mutual of America building in Manhattan to explore a range of questions related to immigration including visas, the untapped immigrant workforce, marketing a business to immigrant populations and cultural diversity in the workplace.

“The Solutions Series was established five years ago to have open, honest discussions about topics of importance to the business community,” said Fedcap CEO Christine McMahon, who opened the event. “Historically, our national perspective on immigration could best be summarized by the iconic poem that is mounted on the Statue of Liberty that begins “Give me your tired, your poor, your huddled masses yearning to be free.” The conversation today would be about “bring me your entrepreneurs, skilled workers and innovators.”

The panel was introduced by Fedcap Chief Strategy Officer Lorrie Lutz, who moderated a highly engaging and informative discussion. First to speak was David Dyssegaard Kallick, Director of Immigration Research Initiative at the Fiscal Policy Institute. Kallick described a population of 41 million immigrants in the United States that is incredibly diverse both culturally and in the workplace.

“Wherever there is economic growth immigrants are part of the story,” he said. “Companies that do not understand immigrant populations will lose their competitive edge.”

Bo Young Lee, Global Diversity and Inclusion Leader, Marsh LLC, the world’s largest insurance company, discussed how a shortage of skilled workers forces companies that would rather hire U.S. citizens – it’s much easier and less expensive – to turn to foreign workers through the H1-B visa program. She also discussed how Marsh has strived to create a culture of inclusion. Companies that are successful in bringing immigrant workers into a recruitment pipeline often fail at creating an inclusive hiring process. To do so requires a greater awareness of cultural mores around body language, expressions of emotion and other factors.

Luis Tejada, Vice President of Sales, Goya Foods, Inc., talked about how Goya grew from a small Main Street business founded by Puerto Rican immigrants in 1936 into America’s largest Hispanic-owned food company, with over $1 billion in annual global sales. A centerpiece of the company’s strategy is learning how to interface with different groups of immigrants, including a growing number of Korean and Middle Eastern customers. “History has proven that cultural inclusiveness is good for business,” he said. “No matter what, immigrants will continue to create opportunities and contribute socially, economically and politically to society.”

Fedcap COO Joe Giannetto closed the event with a personal story about his own parents who came to the U.S. as immigrants. He also talked about our history of hiring immigrants.

“Fedcap plays a huge role in the lives of immigrants and other populations, helping them achieve personal success and realize their dreams,” he said. 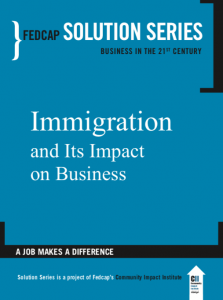