On Thursday October 23rd, over 150 people representing businesses, foundations, nonprofits and government, participated in person and via streaming in Fedcap’s 8th Solution Series. The topic was “The Minimum Wage Increase: Costs, Benefits and Complexities.”

A distinguished panel of experts convened at the Mutual of America building in New York City to explore a topic that has inspired vigorous debate since the first federal minimum wage was instituted in the 1930’s. Proponents and opponents of raising the minimum wage disagree about fundamental questions such as how it will affect employment and job creation; the impact on poverty; the impact on disadvantaged workers, and whether it will hurt or help small businesses.

“The social and economic implications of raising the minimum wage make it a very complex issue,” said Fedcap CEO Christine McMahon, who opened the event. “We have convened this Solutions Series to ask the right questions and to explore this important issue from multiple perspectives.”

The panel offered thought-provoking insights and ideas about the minimum wage. Michael Weinstein, an M.I.T-trained economist and Chief Program Officer for the Robin Hood Foundation, said that economists have studied the minimum wage in detail and produced a vast body of research. While there is disagreement about whether a higher minimum wage is good policy, there is broad consensus that its macroeconomic impact is modest.

“Economists talk about the minimum wage as small change, small impact,” he said. ‘Some jobs will be lost and some families will be raised out of poverty, but across the economy it has a pretty small impact.”

Mr. Weinstein said that the Earned Income Tax Credit, which provides tax rebates to workers who file tax returns, is considered by many to be a more effective tool for lifting families out of poverty than raising the minimum wage.

Beth Moss, Director of Human Resources for the North American operations of ISS, a global provider of facility maintenance services, said that all publicly traded companies are focused on employee compensation. Companies always have to consider market factors when establishing wage levels, and in low-margin businesses like facilities maintenance there is pressure on the level of compensation that ISS can pay for employees who provide those services. A challenge for the industry is to educate customers about the value of facility maintenance in creating a healthy work environment and preserving physical assets. When customers perceive the impact of the service on the bottom line, compensation will rise.

“As the perceived value of our services improves we are highly optimistic that we will have fewer federal minimum wage workers,” Ms. Moss told the audience.

Joanne Pokaski, Director of Workforce Development at Beth Israel Deaconness Medical Center in Boston, said that Beth Israel consistently pays its entry level workers above the minimum wage. The hospital has also implemented measures to help its employees climb the wage ladder. It provides career and academic counseling, free on-site pre-college courses and college-level science courses, as well as a proactive approach to train and promote employees from within the organization. “Our business drivers for these decisions are clear—we have hard to fill mid-tier jobs and by paying well we have a stronger pool of entry level staff who we can develop to fill the mid teir jobs.”

Shamus Jones, Founder and President of Brooklyn Brine, an artisanal pickling business with 10 employees, offered a small business perspective on the minimum wage. As a manufacturer of specialty products competing in an industry dominated by commodity products and pricing, paying subpar wages was never an option. Jones starts his workers at $16 per hour – significantly higher than the minimum wage – but expects a lot in return.

Mr. Jones believes that the increased productivity resulting from reduced employee turnover, high morale, and loyal employees who believe in the company and are willing to work hard to share in its success, more than cover higher wages, and ultimately pay off in an increased bottom line.

“I believe in conscientious capitalism,” he said. “Higher wages means we get much more competitive applicants, who give us the competitive edge we need.”

The audience engaged the panelists in a lively question and answer period right up until the end of the event.

“This Solutions Series has been tremendously informative,” said Fedcap COO Joe Giannetto. “We are grateful to our panel for having provided us with a better understanding of this complex issue.”

PrevPreviousSolution Series: The Intersection of Workforce and Economic Development: Why it Matters to Employers
NextSolution Series: Immigration and Its Impact on BusinessNext 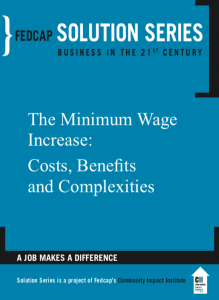