The Inextricable Link Between Economic Empowerment and Justice 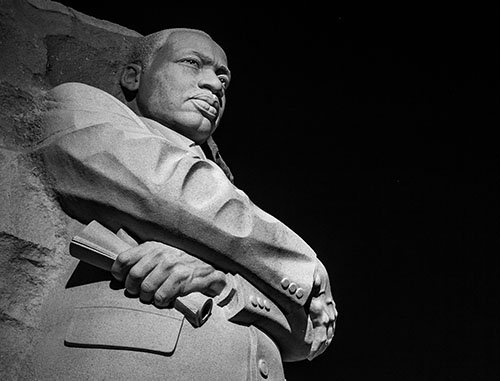 Today across the US, we celebrate Dr. Martin Luther King Jr. and honor the continued fight for social justice—the distribution of wealth, opportunities, and privileges within our society. It is a day to remember the powerful messages woven throughout the iconic speeches of the felled leader of the Civil Rights Movement. Standing on the steps of the Lincoln Memorial, he called on Americans “to sit down together at the table of brotherhood” and “meet our promise of life, liberty, and the pursuit of happiness for all.”

At the core of Dr. King’s messages was his dream for “equality of opportunity.” He saw civil rights inextricably linked with economic empowerment. Just weeks before his death in 1968, Dr. King was preparing to launch a Poor People’s Campaign as a tool to gain economic justice for Black people in America. To this end, Dr. King. gave a speech in Detroit called “The Other America” where he addressed the inextricable link between economics and justice.

The vision was an America where equity in opportunity would be demonstrated by equity in pay.

Yet consider for a moment, the tremendous inequity in pay that still exists for women of color in our country. According to an article posted on the Center for American Progress website entitled Breadwinning Mothers Continue To Be the U.S. Norm, more than 80 percent of Black mothers are key breadwinners for their families, which means their households rely heavily on their wages to make ends meet and get ahead. And over 25% of these nearly four million family households live below the poverty level.

According to the US Census Bureau, in the 25 states (including the District of Columbia) with the largest numbers of Black women working full time, year-round, pay for Black women ranges from 47 to 67 cents for every dollar paid to white, non-Hispanic men in those states. This translates to a median annual wage for Black women of $38,036 as compared to a median annual wage for white, non-Hispanic men of $61,576 (US Census Bureau). These lost wages mean Black women have less money to support themselves and their families, save and invest for the future, and spend on goods and services. Families, businesses and the economy suffer as a result.

According to the National Partnership for Women and Families, if the wage gap was eliminated, on average, a Black woman working full time, year-round would have enough money for approximately:

Imagine the difference that economic equity would make for generations of children of color being raised by Black women. Imagine the economic opportunity that would result for children who could go to college, who see their future through the lens of potential and prosperity instead of poverty and limitations. Imagine the economic difference it would make to our country as an entire cohort is lifted out of poverty, able to purchase goods and services, released from the confines of government subsidies.

Fifty-three years after Dr. King’s death, economic equity remains an unfulfilled dream. But does it have to remain that way? Recently McKinsey and Company launched the McKinsey Institute for Black Economic Mobility with the mission of helping private, public, and social sector leaders take coordinated action to accelerate Black economic development. I salute McKinsey and corporate leaders who are taking a similar stand. As business leaders we can do something about pay inequity. We can be a force to change economic opportunity for people of color—especially women of color who are raising a new generation. We can be the difference makers.

“There comes a time when one must take a position that is neither safe nor politic nor popular, but he must take it because his conscience tells him it is right.”
Dr. Martin Luther King Jr.

Technology as a Poverty Fighting Tool