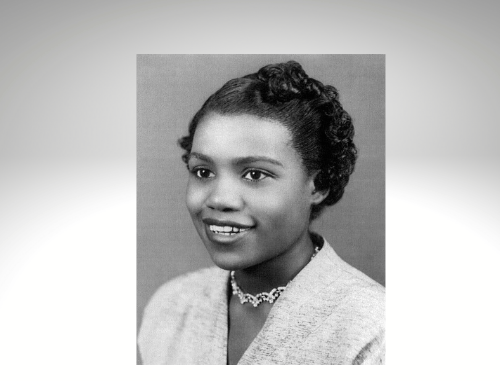 Alberta Jones is the civil rights leader almost no one knows.”
The New York Times

As we come to the end of March and Women’s History Month and seeing what has taken place in the confirmation hearings of Ketanji Brown Jackson, I thought it important to share the profile of a woman you may not know, but who has come to mean a great deal to me—Alberta O. Jones. She was a woman of grit and humor. And like every one of the women profiled during Black History Month, she possessed tremendous tenacity and courage. She was smarter than most everyone around her and yet according to account after account, she was both humble and kind. I am deeply moved by her powerful life and tragic death.

Ms. Jones was born in Louisville, KY in 1930, a time when women, especially women of color, were still discriminated against in virtually every segment of society. Amazingly, she graduated third in her class from the newly integrated University of Illinois and went on to graduate from the Howard University School of Law. Remarkably, when she appeared to take the Kentucky Bar exam, photographers were there to record the event, as she was the only Black woman to ever take the State bar exam. David A. Jones Sr. (no relation) who later went on to co-found Humana Inc., described Ms. Jones as “intelligent, funny and humble with an incredible career ahead of her.”

I became especially intrigued by Ms. Jones when I learned that she was the not only the first Black woman admitted to the bar in Kentucky, but the first woman prosecutor in the Domestic Relations Court. She developed a strong reputation for successfully prosecuting domestic violence cases—a remarkable feat given that many of the cases she tried for spousal abuse involved white men. Doing this in the Jim Crow era required a kind of courage many of us may not be able to grasp.

According to a profile by PBS, when Ms. Jones was interviewed by the Louisville Courier-Journal, she was told, “You’ve got two strikes against you. You’re a woman and you’re a Negro.” Her response was, “Well that means I have one strike left, and I’ve seen people hit home runs many times when they have two strikes.”

She was passionate about helping Black Americans become active in the political process, creating the Independent Voters Association which registered 6,000 African American voters. Her efforts resulted in a major political shakeup in 1961 when Black voters helped oust the mayor and many of the city’s aldermen. Another effort involved successfully petitioning the Board of Voter Registration to set up registration booths in each of the city’s twelve wards. Two years later, the new city administration enacted the first public accommodations ordinance in the South.

Ms. Jones was a member of the Fall City Bar Association, the Louisville Bar Association and the American Bar Association. She helped organize the 1963 civil rights marches in Louisville and the March on Washington on August 28 of that year. She is also known for helping a neighbor of hers negotiate his first boxing contract before he changed his name to Mohammad Ali.

It is hard to fathom what else Alberta Jones might have accomplished had her life not been cut short at the age of 34. On August 5, 1965, her body was discovered in the Ohio River. An autopsy revealed that Jones had received several blows to the head before being tossed unconscious into the water, where she drowned. The case is still not solved.

Is Your Enterprise Intelligent?