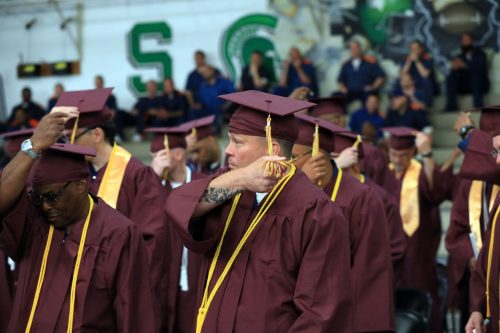 The scene inside this sweaty gymnasium would be familiar to most Americans: new graduates queuing nervously down the aisle as their names were called one by one.

But this was no ordinary graduation, and these were no ordinary students. The gym is one of the few recreational areas of the sprawling prison complex at Parnall Correctional Facility in south central Michigan, and underneath their purple robes, the students—all in their 30s, 40s and 50s—wore dark-blue prison jumpsuits with an orange stripe down the sides of their pants.

Over the past 30 years, as tough-on-crime laws led to a boom in Americans being locked up, the country has faced a vexing question: how to handle people once they are released. Last year, about 630,000 people were released from federal and state prisons, according to federal figures, compared with about 160,000 in 1980.

People who have served prison time face notoriously difficult odds readjusting to society. They frequently deal with discrimination from employers and landlords. Most return to the communities where they are once more surrounded by the people and social circumstances that initially led them astray. Many return to prison within a few years.

The graduation ceremony, which took place here one late June morning, was an attempt—by the prison and the local community college—to alter the inmates’ trajectory via a college education.

That was the case for Michael Ellis, a 37-year-old student who never received much of a conventional education. He dropped out of high school in ninth grade, in part because he was teased for his ratty clothes, and began selling drugs. A few years later, he was sentenced to 20 years in state prison for shooting and killing an abusive brother-in-law who had repeatedly broken a restraining order.

Once behind bars, though, Mr. Ellis wanted to change. He began reading whatever he could find: philosophy books, old textbooks, the dictionary. When college became an option, he enrolled and earned two degrees.

“It’s stereotypical that men come to prison, then they come out of prison and their bodies are different but their minds are locked in the same place. I didn’t want to be that,” he said.

The partnership between Jackson College and area prisons arose under a larger experiment, launched in 2015 by the U.S. Department of Education, to see what might happen if the federal government gave inmates enough financial aid in the form of Pell Grants to cover the cost of a community-college degree. Under the program, known as Second Chance Pell, 64 such community-college partnerships have sprung up at prisons across 27 states.

It is too early to say definitively whether the program has made a difference—the first possible students graduated just last year, and many haven’t yet been paroled. More broadly, though, research suggests education behind bars carries benefits, both in inmates’ employment prospects after prison as well as their critical thinking.

One analysis of available research conducted by the Rand Corp. in 2013 suggests that inmates who enroll in college education are 43% less likely to return to prison.

The Trump administration, which has backed other criminal-justice reform efforts, has already announced it intends to expand the experiment, and both Democrats and Republicans in Congress support making Pell Grants universally available to prisoners.

But the idea of offering government funds to educate incarcerated students hasn’t always been so popular. The 1994 crime bill, authored by current Democratic presidential front-runner Joe Biden, banned federal financial aid from flowing to people behind bars, reflecting a belief that people sent to prison forfeited their right to public benefits, including higher education.

Before then, throughout the 1970s and 1980s, Jackson College operated a version of its prison education program. It was shut down in the wake of the 1994 crime bill.

“We stopped teaching because of the climate,” said Lee Hampton, Jackson College’s chief diversity officer. Mr. Hampton recalled community leaders in Jackson approaching him to ask: “Why are you focused on prisoners when there are people outside who still need help?”

In 2010, the school’s top officers held a meeting to puzzle out why so few of their black male students were making it to graduation. A significant proportion, they realized, were either going to prison or had served time before they enrolled in school. Soon after, they resumed offering some classes.

Then, in 2015, the Obama administration picked Jackson College as its single largest experiment site, allotting it more than a thousand Pell Grant slots. The federal assistance has allowed the school to expand its offerings—it now offers two associate degree programs, in general studies and business administration—and the extra 700 students who have enrolled so far have helped the school reach its own enrollment targets.

There are obvious logistical challenges to teaching inside a prison. Schools must have buy-in from the warden—not always an easy task—and faculty must be able to reliably get inside, which can be unpredictable if a prison goes under lockdown. There is no internet. Students don’t have their own laptops, and they can’t buy their own textbooks.

At Jackson, an art history professor was thrown for a loop when her chosen textbook was rejected for containing too many images of nude statues. After teaching his standard course one semester, a sociology professor said he opted to water down a lecture on sexual abuse for fear it could serve as an unwitting how-to guide.

Once inside, though, Jackson faculty say the inmates are model students—often outperforming their students on the main community-college campus.

Most of the students who enrolled in prison education and have since been released have gone on to study toward their bachelor’s degree, program leaders say. But students aren’t always as successful on the outside. The factors that allowed them to succeed inside prison—books and other course materials handed to them, embedded tutors, few other demands on their time—melt away once they leave.

Kristi Fraga, 43 years old, completed most of an associate’s program before she was released from prison two years ago, and finished her degree when she got out. But the transition has been rocky. She wasn’t sure how to find an apartment or how to make rent payments once she secured one. It took her several months and nearly 40 applications to land a part-time job as a waitress.

Just this spring, she enrolled at the University of Michigan, Dearborn, to work toward a bachelor’s in economics and women’s studies. But, she said, she is taking it slow.

“When I first left prison, I was a cannonball shot in the air,” she said. “I’ve learned some hard lessons that I am not superhuman anymore.”

Still, the men who graduated last month say their education has had at least one lasting effect. Randy Rogers, a 43-year-old who has served 18 years of a 20-year sentence for multiple armed robberies, said his studies had transformed his self-image.

“Coming to prison, I felt like I let a lot of people down, including my mother and my family and even myself,” he said. “And now it’s the feeling of, I kind of redeemed myself.”

Originally Published in The Wall Street Journal by Michelle Hackman.

Words of Wisdom in the Pursuit of Justice: A Compilation of Perspectives to Celebrate Black History Month

The Value of An Outcome-Focused Theory of Change